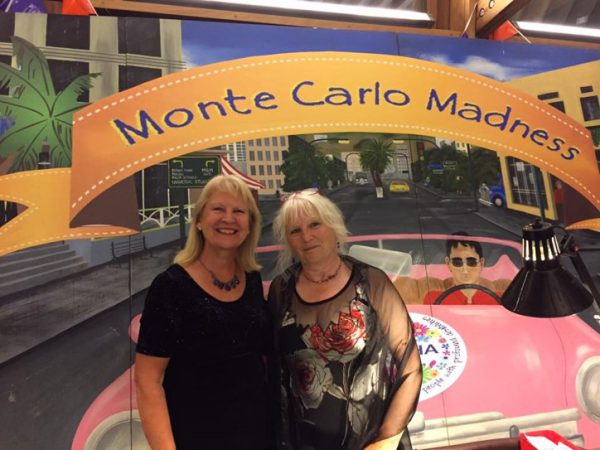 Deal pier was the setting on Friday for a successful Casino night held by the Grans on the Run duo – Jill Burford and Pat Wilson.  The Grans on the Run held the event to raise money for their cars fundraising in this years Martha car challenge – Monte Carlo Madness who will be driving their knitted car Bessie to Monte Carlo later this year. The total money raised from the event is expected to be at least £3,500.

Entertainment on the night was provided by Wild Card Fun Casinos with Jim Morris and Therese. Guests enjoyed playing roulette and blackjack with the most successful players on the night receiving prizes donated by local businesses.

Mellow jazz was played as people arrived to the beautifully decorated setting of Jasin’s Restaurant at the end of the pier, performed by Kent band, the Mayflies from Tunbridge Wells.

Magic on the night was provided by top London magician Lee Warren who left guests baffled with his close up magic tricks.

Local favourite Pussy D’Amour added to the atmosphere with a specially chosen set of songs for the evening including “Hey Big Spender”.

A delicious Turkish meal prepared by the restaurant was enjoyed by the guests while the music played and the beautiful sunset faded and was replaced by the light of the full moon.

Jill and Pat are very grateful for the support and help from Martha Trust’s fundraiser Kerry Rubins and everyone had a fantastic evening.